Many of the loans have been taken from microfinance companies that began operating in Myanmar after a Microfinance Law was enacted in November 2011.

Prior to the law being introduced, microfinance lending was limited to the state-owned Myanmar Agricultural Development Bank and some development projects, in particular a large programme run by the international NGO Pact. These covered a fraction of the population; in 2012, the United Nations estimated that unmet demand for microcredit was close to US$1 billion. When people needed money urgently, they often had no choice but to turn to illegal moneylenders, who typically charged interest rates of 10pc or 20pc a month.

Government data illustrates the boom in microfinance that has happened since. In 2012-13 there were 126 microfinance institutions, or MFIs, servicing 574,085 clients; three years later this had risen to 167 MFIs and 1,874,387 clients. Data from April shows there are 193 microfinance companies operating with the permission of the Microfinance Business Supervisory Committee of the Ministry of Planning, Finance and Industry, with more than 5 million clients (those who borrow from multiple MFIs are counted more than once). Most borrowers are from Yangon, Mandalay and Ayeyarwady regions, as well as Mon State.

This growth has also been reflected in MFIs’ loan portfolios, which have expanded significantly since the government relaxed some restrictions on them in August 2016, including a rule that they serve as many clients in rural areas as urban. Data from the Financial Regulatory Department shows that at the end of September 2019 the microfinance loan pool was K1.87 trillion (about $1.33 billion), up from just K405 billion three years earlier when the rules were changed. Most loans are issued by a relatively small number of MFIs. 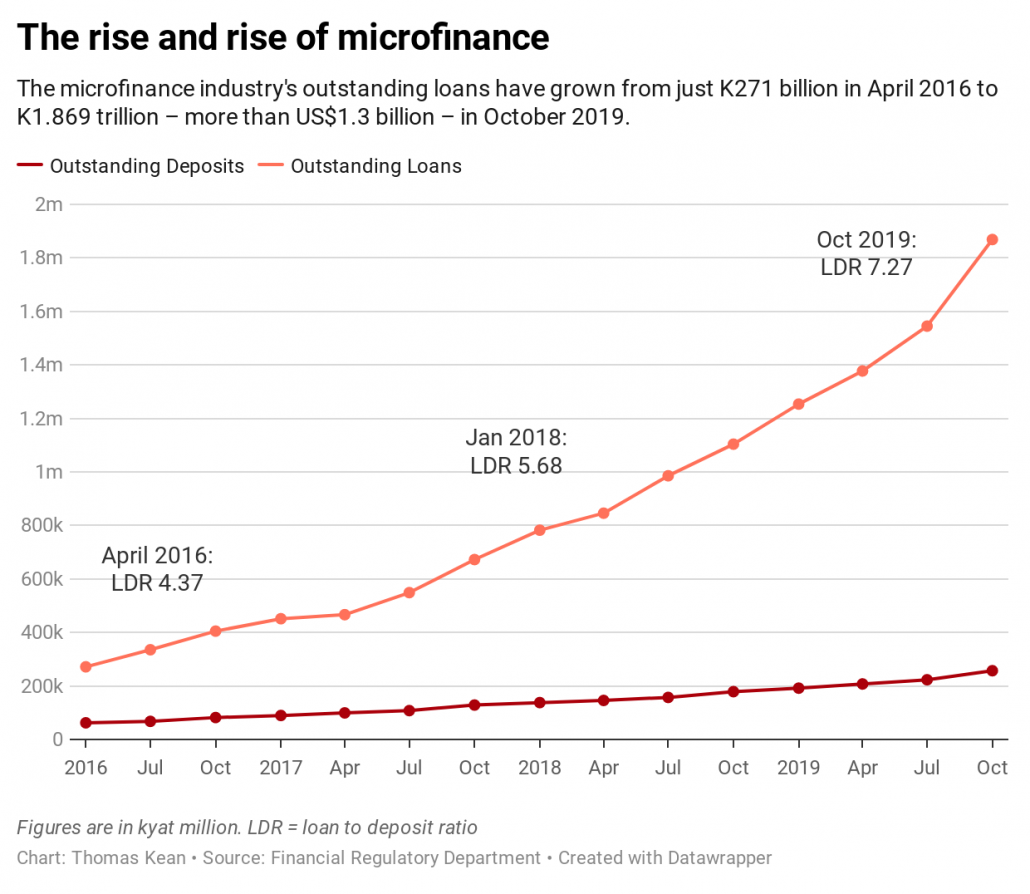 It’s not clear how many microfinance debtors are struggling to make repayments because of COVID-19’s effect on the economy. But even before the virus emerged in late 2019 there had been concerns about the health of the MFI sector and the social impacts of indebtedness.

Rates of non-performing loans do not necessarily provide a good indication. Many MFIs use a group lending system, where several borrowers’ debts are effectively combined into a single loan. When there’s a default, other members of the group are left to pick up the tab – but when they do, the loan is still considered repaid.

As the number of microfinance companies has increased, so have media reports about defaulting or absconding borrowers. Multiple borrowing has become increasingly common, as has reports of people taking on high-interest loans from informal moneylenders to repay debts to microfinance companies.

These concerns were borne out in a survey of more than 650 borrowers across 10 townships in five states and regions in June and July 2018. The survey found that almost one-third of respondents had three or more loans, and 25pc of respondents said they had difficulty making repayments. Multiple borrowing was more common in areas with a higher number of MFIs, like Yangon and Bago, and there was a strong correlation between the number of loans and the risk of payment default. Financial literacy training was mostly absent. The survey recommended limiting the number of MFIs in an area, conducting more checks on prospective clients and shifting from group to individual loans.

Microfinance in Myanmar Amidst Covid-19